Researchers from the group of Professor Roel Dullens and Professor Dirk Aarts have developed a new system of micrometre sized banana-shaped particles (Fig. 1 and 2). With these bananas they experimentally confirm the existence of the so-called ‘splay-bend nematic’ liquid crystal phase (see Fig. 3 and 4), which was predicted 40 years ago, but had remained elusive until now. These results provide the cornerstone for the further development of new banana-shaped liquid crystals.

Liquid crystals are a fascinating state of matter that we encounter in our everyday life. For example, the cell membranes in our bodies are in a liquid crystalline state - and so are the functional materials used in displays of TVs and computers. The reason this state of matter is a cornerstone of both living and technological materials is inherent to its unique properties: it shows order in a preferred direction, like a solid, but it also flows, like a liquid, and as such, it easily responds to external stimuli such as electric fields.

The shape of the liquid crystal forming building blocks, which are typically elongated molecules, has an enormous impact on the way they pack into different liquid crystals. While simple rod-like molecules form just a handful of liquid crystal phases, banana-shaped molecules form more than fifty. These ‘banana phases’ were discovered 20 years ago and have since then initiated a true ‘banana-mania’ in the field of liquid crystals. The fact that even a small molecular curvature results in a new library of banana phases is not only fascinating from a fundamental point of view, but also from an industrial perspective, as they can switch their orientation under electric fields at ultra-fast speeds, making them ideal candidates for new highly responsive displays. 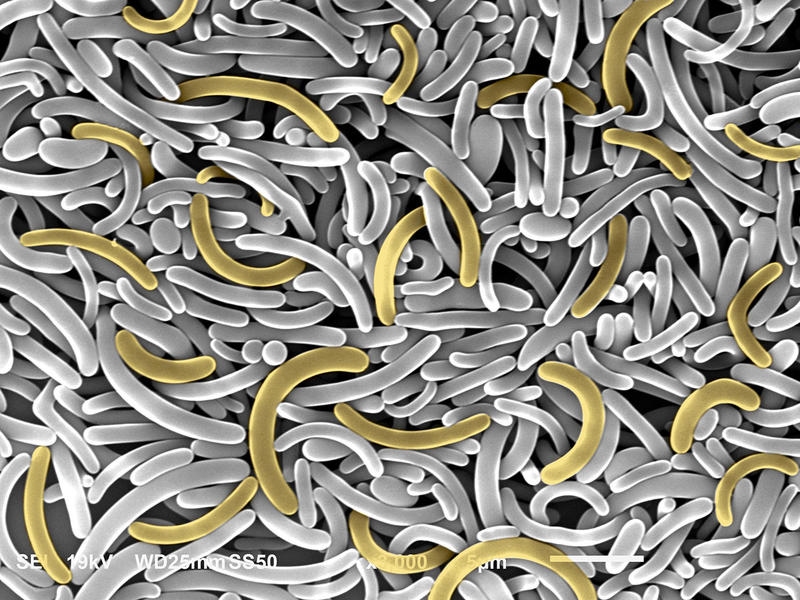 Fig. 1. Scanning electron microscopy image of the colloidal bananas. Note the false colouring emphasises the shape of the particles. The scale bar is 5 micrometers.

Despite the importance of banana phases, to date nobody has managed to look inside them and directly visualize the way the banana particles pack or move. This is largely due to the fact that molecular systems are extremely small and move very fast, making their direct imaging extremely challenging even when using the most advanced microscopes.

Carla Fernandez-Rico and co-workers have recently developed a system of colloidal bananas to study and visualize, for the first time, the inner details of banana-shaped liquid crystals using optical microscopy. The novel synthetic strategy is based on the buckling of initially straight rod-like particles by means of heat exposure. Crucially, the curvature of the colloidal bananas can be precisely tuned by controlling the rigidity of the rods before the heating step, which is of key importance for the way the bananas self-organise into highly packed phases.

Using confocal microscopy and image analysis techniques, researchers from the Oxford Colloid group have directly determined the positions and orientations of differently curved banana-shaped particles, which enabled the identification of a wide range of different banana phases, as shown in Fig.2. Moreover, with their colloidal bananas they experimentally confirmed the existence of the so-called splay-bend nematic liquid crystal phase (see Fig.3 and 4), which was predicted 40 years ago, but had remained elusive until now.

The experimental confirmation of the splay-bend nematic phase using the colloidal bananas represents an important breakthrough in the liquid crystal field as it has allowed to identify the key parameters that contribute to its stability, which is of key importance for its industrial production. The unique properties of the splay-bend nematic phase, which arise from the in-plane undulations of the particle orientations, promise novel electro-optic effects, which would lead to low-threshold liquid crystal displays and on and off response times substantially faster than those of usual liquid crystal materials.

This work is a textbook example of how chemistry and physics go hand-in-hand to not only shine light on previously inaccessible scientific questions, which in this case was the actual stability of the splay-bend nematic phase, but also to open new and exciting directions for further research such as the assembly of new phases by, for instance, mixing bananas of different curvatures or also for modelling biological systems, such as biofilms formed by banana-shaped bacteria. 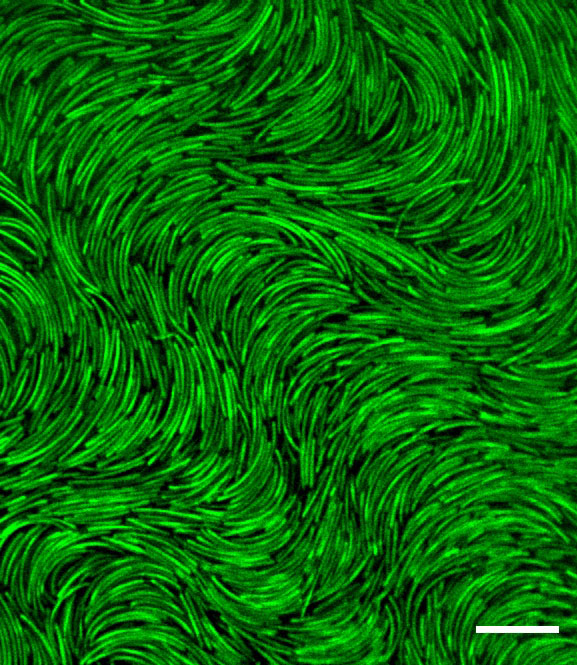 Fig.3. Confocal microscopy image of the splay-bend nematic phase. Note the wavy nature of these phase arises from the banana-shaped of the particles when packing close together. The scale bar is 10 micrometers. 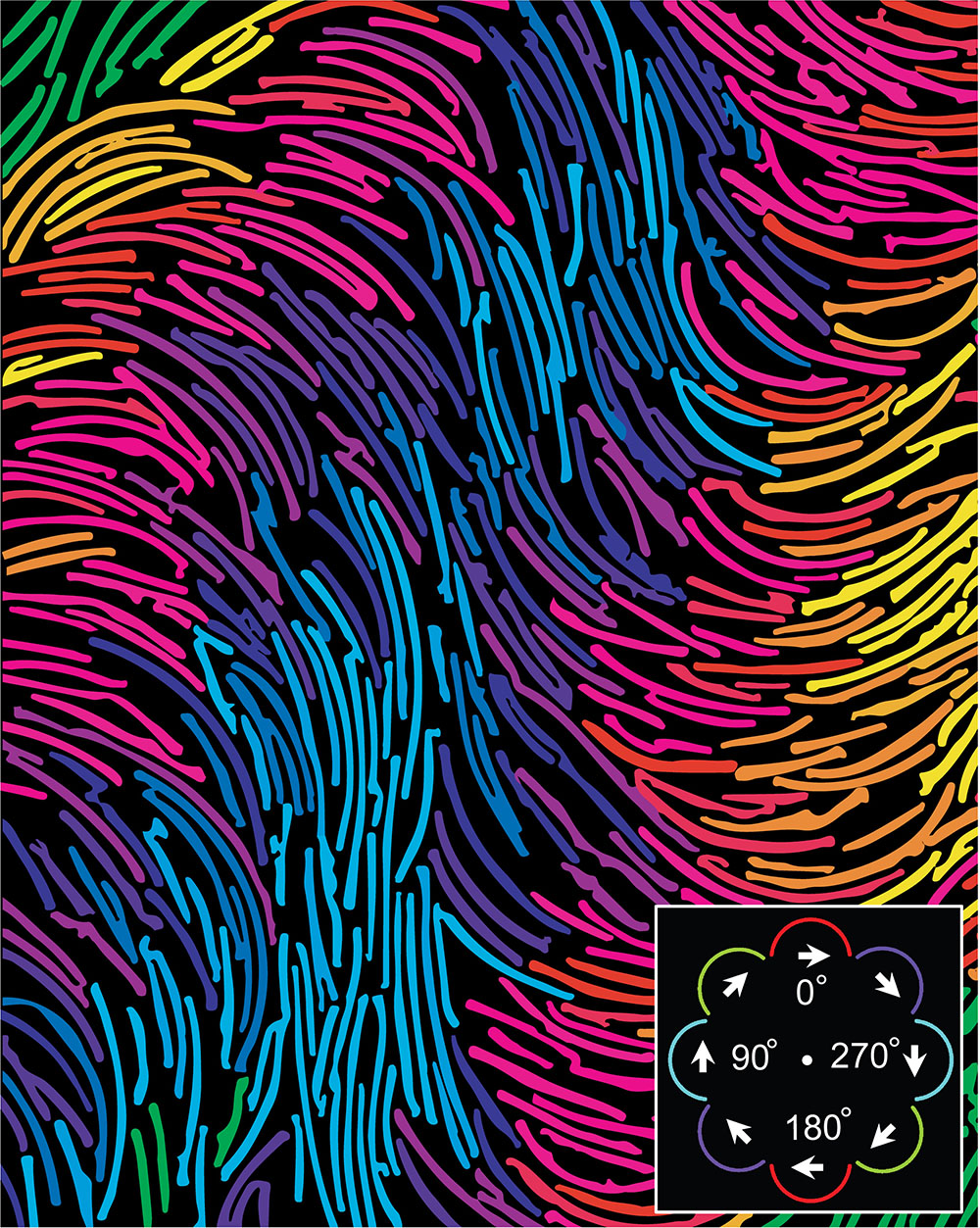 Fig. 4. Bananas in the splay-bend nematic phase coloured according to the orientation of their short axis as indicated by the white arrows in the inset.

Read the full paper in Science