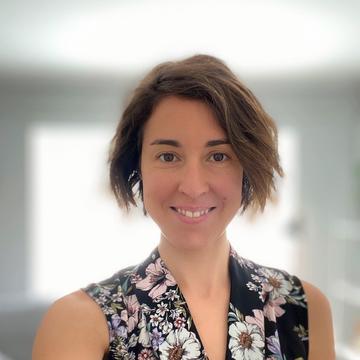 I am Maitane, Programme Manager for the Oxford EPSRC Centre for Doctoral Training in Inorganic Chemistry for Future Manufacturing (OxICFM CDT). I am originally from Algorta, a little city by the sea in the North of Spain. I studied Chemistry at the University of the Basque Country, where I also obtained my PhD in Organic Chemistry working with Professor Vicario. I then moved to LMU Munich, and worked as a postdoctoral researcher in the laboratories of Professor Knöchel.

I joined Oxford Chemistry in 2014 to work with Professor Michael Willis, first as a PDRA and then as a Marie Curie Fellow. Having studied in a country where a chemist has mostly three options (i.e. become an academic, work in a lab within the private sector, or as a school teacher), arriving in Oxford and discovering the multitude of roles that chemists are sought for in the UK was completely eye opening. When an undergraduate student in the Willis group first mentioned he was going to work in finance after he finished his Masters, I thought it was some kind of joke! From the three options that I had known, a career in academia had always been my goal, and every career move up until then had focussed on building a suitable skillset and competitive background. I really enjoyed working as a researcher back then, but the idea that there could be an alternative career for me had seeded in my head and prompted me to explore different options – what if there were other roles out there that could suit me better?

As it turns out, there were. Many hours of reading about different roles, preparing CVs and cover letters oriented away from academia, and a few interviews later, in January 2017 I took up the role of Programme Manager for the Synthesis for Biology and Medicine CDT (SBM CDT) here in the Department, as a maternity cover. This position involved the overall co-ordination and management of the programme. The SBM CDT is a large centre for doctoral training, with more than a hundred students, about 40 academics and 11 industrial partners. A large part of the job focussed on managing interactions between the different stakeholders – liaising with academics and industrialists regarding effective delivery of the taught course, sharing of research results, plus collaborating on case studies and workshops. Regular interaction with the students to support them and ensure their studies were progressing smoothly was also essential. Other important parts of the role included supporting the financial administration activities for the programme, planning and co-ordinating events for recruitment purposes, and to showcase the impact of the research conducted within the programme.

I feel that I was very lucky; it was a tough decision to step out the path I had initially chosen, but the new role suited me from day one. I missed the camaraderie of working in a lab for a while, but the feeling of accomplishment at the end of every working day was something new and truly satisfying. And very importantly, I found myself exploiting all those transferable skills I had inadvertently acquired throughout my years of studies, i.e. problem solving, critical thinking, organisational skills, time management, etc. - they are all crucial skills for my daily tasks. The management team was excellent; they had a very clear vision about what they wanted the doctoral training centre to be, and were incredibly passionate about it. It was a pleasure to work with them for almost three years.

I moved to my current role as a Programme Manager with the OxICFM CDT after returning from maternity leave in January 2020, when a position become available to join the recently established doctoral training programme in inorganic synthesis. Coming back from maternity leave was initially challenging; I joined a new programme with a new team, while trying to learn how to juggle a full-time job and family life. Nonetheless, I was very fortunate to join another very supportive and passionate team – this seems to be a trend in this Department! Soon it felt I had always been part of the team, and with their support I quickly adjusted to the new role. Each CDT programme is unique, and certainly operate with slightly different approaches, but my day-to-day responsibilities continue to be very similar to those I used to carry out with the SBM CDT.

I have now worked at Oxford Chemistry for 7 years, and have a few more ahead with the OxICFM CDT. I arrived as a researcher and slowly moved into research administration roles. I do not yet know what the next steps may be once my current contract comes to an end, but one thing I am certain of – if I can continue to work at Oxford Chemistry, I will. We have a Department full of passionate and welcoming people, always willing to help. Once you join them, it is difficult to leave.