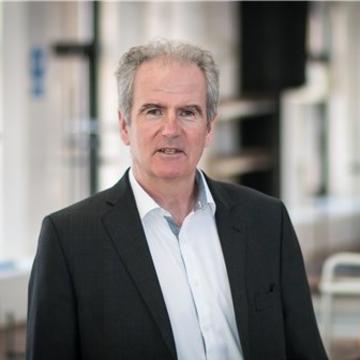 Professor of Organometallic and Materials Chemistry

Research in the O’Hare group spans both solid state and organometallic chemistry. There is a strong focus on developing breakthroughs to meet some of the major global challenges such as the sustainable use of resources including CO2, the circular economy, future design and use of plastics, and green chemistry.

Our group develops new organic ligand systems such as permethylpentalene (Pn*) in order to complex to metals and create new chemical reactivity and bonding. We study these complexes extensively using the latest advanced physical methods and investigate their catalytic properties for a range of chemical transformations. These studies include the polymerisation of olefins and other renewable feedstocks such as lactones. We are also investigating the use of CO2 as a monomer in polymerisation reactions.

We also study surface organometallic chemistry, a challenging field in which molecular chemistry meets classical solid state chemistry.  The immobilisation of molecular-based organometallic catalysts on solid inorganic supports, this is a key aspect for their successful implementation at an industrial scale.

SCG-Oxford Centre of Excellence in Chemistry

Established in 2012, the SCG-Oxford Centre of Excellence for Chemistry (CoE) is a unique collaboration between SCG (a leading business conglomerate in the ASEAN region) and Oxford's Department of Chemistry. The CoE focuses on research and development in the fields of advanced materials and catalysis. Its objective is to act as a hub for academic/industry collaboration to drive innovation to SCG and impact for Oxford research. Ground-breaking discoveries have been made: from new catalysts for CO2 conversion, alkane chemistry, nanomaterials as functional additives in polymer packaging and energy devices. In addition to influencing SCG’s strategic commercial developments as an R&D led company, the CoE is enhancing UK-Thai relations through skills training, mentoring and inward investment to the UK.

Professor Dermot O’Hare was born in Newry, Co. Down and studied at Balliol College Oxford where he obtained his BSc in 1982 and his D. Phil in 1985, under the direction of Professor M.L.H Green. Subsequently, he was awarded a Royal Commission of 1851 Research Fellowship.

He was a visiting research fellow at CR&D E.I. du Pont de Nemours in Wilmington, Delaware in 1986/7 where he worked in the group led by Professor J.S. Miller on molecular-based magnetic materials. In 1987 he returned to Oxford to a short term lectureship and in 1990 he was appointed to a permanent University position and a Septcentenary Tutorial Fellowship at Balliol College.

In 1996 he was honoured by the Institüt de France, Académie des Sciences as one of the top 50 leading scientists in Europe under 40 yrs. He was the Royal Society of Chemistry Sir Edward Frankland Fellow in 1996/97. In 1997 he was awarded the Exxon European Chemical and Engineering Prize. In 1998 he became Professor.

Professor O'Hare leads a multi-disciplinary research team (34 including PDRA, PhD and MChem researchers). The team works across the broad areas of catalysis and nanomaterials. O'Hare's research is specifically targeted at finding solutions to global issues relating to energy, zero carbon and the circular economy.  In 2010 he won the Royal Society of Chemistry’s Ludwig Mond award for outstanding research in Inorganic chemistry.

In 2012, following the establishment of a mutually successful relationship with SCG Chemicals Co. Ltd, Dermot was instrumental in creating the SCG-Oxford Centre of Excellence for Chemistry (CoE) on which he serves as the Director. This is a unique collaboration between SCG and the University of Oxford with dedicated laboratories in the Department of Chemistry focusing on the research and development in the area of Nanomaterials and catalysis. It has employed forty-five people over 49 projects with total committed funds of over £19 million.

The establishment of the CoE itself has strengthened scientific and commercial ties between the UK and Thailand leading to Professor Dermot O’Hare and SCG's presentation to HRH Princess Sirindhorn at the British Embassy, Bangkok in 2016, which was a tremendous honor. Also in recognition of the creation of the CoE he received an Impact Award from the University of Oxford.

In 2016 he was awarded the RSC Tilden for his creative work on the synthesis, reactivity and advanced characterisation of molecular inorganic compounds and materials spanning organometallic chemistry to framework and layered materials. In 2019 the SCG-Oxford Centre of Excellence for Chemistry (CoE) was awarded the Royal Society of Chemistry Academia-Industry Prize.